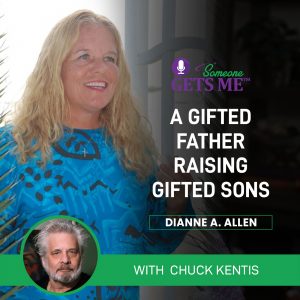 Not only is Chuck Kentis a great keyboardist, songwriter, composer and producer — he has also successfully raised artistic geniuses in his children. He comes back to join the show and share what it’s like being a parent helping develop traits to fuel a kid’s interests, encouraging creativity and discipline, and adapting lessons from his open-minded parents that allowed him to follow a passion that many deemed an unprofitable hobby.

Join me in this episode of Someone Gets Me — A Gifted Father Raising Gifted Sons With Chuck Kentis. ▶️

Key point covered in this episode:

✔️Chuck is fortunate to have a long and successful career that he truly loved and never considered work. Since joining his first high school band at age 15 and reaching the major success he is today, he shares, “It’s such a blessing if you can actually do something that you want to do.”

✔️Chuck shares how his parents were judged by their brothers and sisters for allowing him to play bars and clubs. “My parents had to defy that and say, ‘No, this is what we want for him.’ It was so encouraging for me, and they never said: ‘you can’t do this’ or ‘you’ve got to get a real job’ or something like that. I always felt encouraged, and that’s what I give my own children.”

✔️Despite being on the road on tours for long periods, Chuck was able to help kids Avery and Noah follow their creative pursuits with the support of his wife. There’s no guarantee for many parents as their children have a career in acting, theater, arts, and stuff like that. Chuck shares, “but if the child doesn’t have the opportunity to do that, they’ll look back and say, “What if, what if, what if?”

✔️Take away the fear of “what if you can’t?” and see where it goes. Chuck advises parents to understand what their children’s interests are and study how they can be of support to them.

✔️Safety (for your kids) means they can screw up, and they will still be loved. A safe container for your children allows them to make mistakes and learn from their failures. This is the best way to make space for kids to be themselves.

Chuck Kentis was born in Passaic, NJ, in 1956. At five years old, he played the piano and then percussion and trombone in grade school. He started on the flute and music composition through high school. He took classes at Jersey City State College then Mannes College of Music for theory and composition in his senior year.

Chuck started the first high school rock band as a freshman, then at age 15, began playing bars and clubs in rock bands throughout NJ, NY, CONN, RI, and MASS.

He wound up in a glam-rock band in the early 70s, sharing stages with New York Dolls and Twisted Sister (the original singer and drummer). Playing the New York rock circuit in the late 70s, he got hooked up with a good group of musicians. He began to pick up national and international tours with artists such as Nona Hendryx, Julian Lennon, Power Station, John Waite, Richard Marx, Paul Young, ABC, Micheal Bolton, and Rod Stewart, with whom he has worked with for thirty years.

Chuck composed for many music production companies such as Killer Tracks, Mega Trax, and Extreme Music. His music can also be heard in many commercials for the TV advertising company Face The Music. In addition, he scored promos for Showtime. Chuck has also been composing video game music for Disney, producing records and scoring films with partner David Palmer for the past several years.

You have a vision inside to create something bigger than you. What you need is a community and a mentor. The Someone Gets Me Experience could be that perfect solution to bringing your heart’s desire into reality. You will grow, transform and connect. https://msdianneallen.com/someone-gets-me-experience/

Be sure to take a second and subscribe to the show and share it with anyone you think will benefit. Until next time, remember the world needs your unique gift, let your light shine.