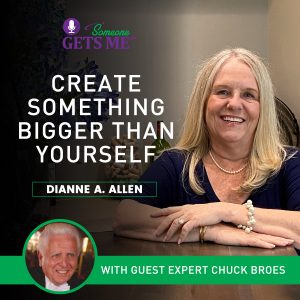 “As visionaries, we’re meant to create something bigger than ourselves.”

Have you ever wished to be a part of something far more significant than your small existence? We tend to lock ourselves inside our comfort zone. We see our lives as if there were boxes spread around you with labels.

In this week’s episode, Dianne A. Allen welcomes Chuck Broes to talk about creating something bigger than yourself.

Part One of ‘Create Something Bigger than Yourself with Chuck Broes’

Chuck Broes is a business and healthcare visionary whose career spans over 57 years in domestic and foreign markets.

In the past, he has specialized in the areas of incubation, start-ups, mergers, and acquisitions, corporate turn-around, franchising, spin-offs, and roll-ups.

Chuck has served in various executive roles, including Chief Executive Officer, Chief Financial Officer and Chief Operating Officer, including public and private companies, profit and non-profit.
Now doing the most interesting and rewarding project of his lifetime called Home for Patriots Foundation.

Part Two of ‘Create Something Bigger than Yourself with Chuck Broes’

Chuck opened up a dance school for children as his first business. He opened up his second studio in the Los Angeles area.

By the time he was a little over eighteen, he had a thousand students going through his two centers a day.

Eventually, he opened up a health club and learned how to grow his capacity to help others.

“Wake up and live your vision.” – Dianne A. Allen

So, when we kaleidoscope it, something magical happens in that synergy.

Be sure to watch the full episode so you can be inspired to live your vision!

How To Connect With Dianne A. Allen