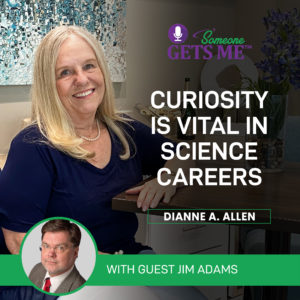 “You need to be able to pivot because things aren’t always going to go your way.”  — Jim Adams

Science and engineering are among the most rewarding careers one can pursue. In this episode, we are joined by Jim Adams, whose story is something that we can’t leave untold in hopes of inspiring others to pursue their dreams.

Jim retired from NASA in 2016. He is a retired Scientist and Engineer. He was born in Fresno, California, but he spent most of his life in a suburb of Philadelphia, near Valley Forge, where George Washington spent the winter of 1777. Space has always been a part of Jim’s life. His father worked in the aerospace industry from the 1950s until he retired in 1989.

In college, he had been playing with microchips to create microprocessors, and he recognized that all the mechanical clunky cash registers of the day would eventually go electronic. Fortunately, the companies working on an electronic redesign of cash registers were looking for electronic engineering majors and NOT physics majors. Thus, Jim ended up working for the Department of Defense on a contract (his second choice) at General Electric in Philadelphia. Later, his duties expanded to include NASA contract work as well. And that’s how his inspiring NASA journey started.

“Understanding where you are does help you stay focused.” – Jim Adams

He has worked with a myriad of amazing people, world-class scientists, and engineers which is one of the sweetest spots in his long career. He’s married to magical things like critical thinking, science, and creativity.

If you’re curious about what’s the most challenging part of working at NASA, Jim says, “Math is the hardest part, specifically making sure that the spacecraft got to Mars.” NASA’s spacecraft can miss Mars because someone might have forgotten to convert kilometers to miles.

Just like any other industry out there, it was a learning curve that made Jim firmly believe that you don’t get things right all the time. He learned that it’s important to celebrate small accomplishments along the way so you can stay on track and monitor your progress.

NASA has a couple of processes for establishing what they want to achieve in their science areas. It involves a worldwide engagement of planetary scientists. There are teams around the world that have been working to answer some fundamental science questions. What inspired Jim about the job was the progress that they were making monthly when it comes to understanding our place in the solar system.

Another challenge that he had was interpersonal relationships and guiding a team throughout the process because most bright engineers and scientists are introverted thinkers. They don’t want to speak until they know that they got the entire solution figured out in their mind, while the creative’s management likes to be informed along the way and participate.

“It’s important for everybody to get involved in arts because it defines the future of society.” – Jim Adams

If a young person expressed an interest in building model airplanes, get them a model airplane kit. If they’re interested in flying kites, then fly a kite. It’s essential to find ways to nurture and recognize the things that interest the next generation.

The other thing is: arts are incredibly crucial for science and technology.

Arts inspire an entire generation, and that generation then defines the goals and the objectives, and ultimately the vision of a society that feeds the scientists and the engineers.

Then, the scientists and engineers are trying to answer society’s questions and accomplish the things that society says they think they need. It’s essential for everybody to get involved in the arts because it defines the future of society.

Connect with Dianne A. Allen