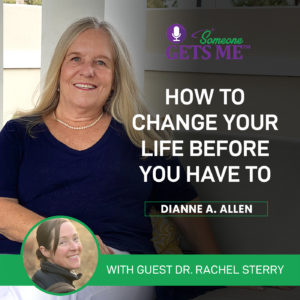 “Having a lot of negative self-talk about body image and making a change from a place of fear is most likely not going to be sustainable.”

How many times have you tried to change something you’ve been unsuccessful in changing before? In this week’s episode, we have Dr. Rachel Sterry, an acupuncturist and a doctor of natural medicine talking about how to change your life before you have to.

Part One of ‘How to Change Your Life Before You Have to with Dr. Rachel Sterry’

Dr. Sterry shares a difference between wanting to embrace change and thinking you should make a change. These two things have a significant bearing on your success because real change must come from a place of excitement and the motivation to achieve good health. If it comes from the place of “I should do this,” it takes on a very different tone.

“The value is not in the doing. It’s in your inherent beingness.” – Dianne A. Allen

Some people who want to make changes to their diet end up having many negative self-talk and body shaming themselves. The truth is, if it comes from a place of fear, it’s not going to be sustainable in the long run. The choices you make today will impact who you’re going to be in the next years of your life.

Part Two of ‘How to Change Your Life Before You Have to with Dr. Rachel Sterry’

Dr. Sterry says, “I’m a big believer in sustainable change. I don’t think you can do that by changing everything all at once.”

The kind of change you wish to happen depends on how solid your foundation is. There is no magic pill, magic wand, or genie in a bottle that could facilitate the changes just because you want to see quick results, whatever that may be.

“You need to change something that you’ve been unsuccessful in changing before.” – Dr. Rachel Sterry

It all boils down to one question: what is your biggest motivator? If you’re driven by fear, it’s usually because of guilt and shame, especially if they’re not engaging in the process they’ve agreed to change.

Just like grapes that need to be turned into a good wine, it’s more about the soil. It doesn’t matter what you spray on your grapes and what you do to them. If you don’t plant them in soil rich in what they need, they’re not going to thrive. It’s the same way that we’re approaching medicine right now; the soil symbolizes our health. Are you taking care of your body in the ways that are going to allow you to thrive?

She received her BA in medical anthropology from Colby College, and, after declining an offer to attend Harvard Medical School, she received my medical training from the National University of Natural Medicine.

Which brings us to today, where she gets to help busy mamas reclaim their health and live the life they’ve envisioned.

For me, the dream is helping mamas take care of themselves as well as they care for everyone else so they get to enjoy the sometimes bumpy journey through motherhood.

How to Connect with Dr Rachel Sterry