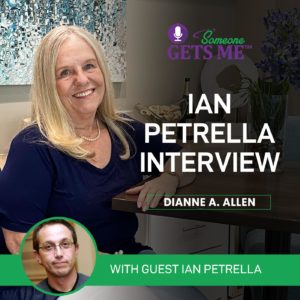 “We’re naturally meant to be connected, so we’re starting to get tired of being disconnected.”

This week on the Someone Gets Me Podcast, I interviewed Ian Petrella. Ian Petrella started his acting career at the age of three, a suggestion by an Aunt who worked at the Herb Tannen Talent Agency. Ian was presented a contract and a S.A.G. card after his very first audition. Through the years he appeared in numerous television commercials and T.V. shows. In 1983 Ian landed the part of Randy Parker in the now classic holiday film “A Christmas Story”. It wouldn’t be till later in his career when Ian would receive any kind of recognition for the role, but it was this film that put him into the hearts of millions.

Ian continues to tour and make appearances during the holiday season along with the rest of the cast of “A Christmas Story”, bringing back fond memories to thousands of fans old and new. See what he is up to now on this week’s Someone Gets Me Podcast.

Part One of ‘Ian Petrella Interview’

Attending auditions has been a normal routine for Ian when he was young and by the time he got his big break, he was so proud of it and managed to balance his excitement and professionalism as an eight-year-old actor.

In 1983, Ian landed the part of Randy Parker in the now classic holiday film “A Christmas Story”. This film elevated his career. Now, he is an amazing, talented adult, inspiring hope and living his vision, everything from improv and puppetry and other forms of acting.

“You’re going to be put on screen, and everybody’s going to love you. But if you’re not prepared for it, it can go to your head, and you could do some damaging things.” – Ian Petrella

Improv is something that he wanted to pursue for a long time. He’s eager to follow the footsteps of his so-called heroes, the people he admires the most.   Ian also shares that the hardest thing about improv is it’s not always about going for the joke or punch line. Improv is completely different from that. It’s really more about listening to other people you’re working with on stage. It’s all about give and take.

Another interesting thing about Ian is that he’s attracted to puppetry because it feeds his creativity. Growing up, he loved watching puppets until he got into it later on as an adult. There was a time when he was only a production assistant and asked the director if he could play with the puppets.

That opened up an opportunity for his potential to be seen. Thus, he started working on different projects with that company. The 90s was a challenging time to get into puppetry because computers were coming in.

“Hollywood is a big game of “follow the leader.” Whoever comes up with a good idea first, that’s who you follow after that.” – Ian Petrella

In today’s digital era, puppetry is starting to make a good comeback. People sense nostalgia when they see a puppet. The most exciting part about it is that you’re acting using your voice and having to give all your emotions through body language to make that moment seem more alive.

Ian decided it was time to come home, not to L.A., but to San Francisco, where he studied film and performed puppetry independently for film and stage. While in school Ian discovered animation.

This was a good discovery since Ian was running out of money to perform and make puppets. He still continues his passion with cartooning to this day.

Ian Petrella started his acting career at the age of three, a suggestion by an Aunt who worked at the Herb Tannen Talent Agency. He was presented a contract and a S.A.G. card after his very first audition. Through the years he appeared in numerous television commercials and T.V. shows.

Through his teen years Ian continued acting, and later began to study comedy improv. He trained at L.A’s famous Groundlings Comedy Theater. At age 17 he was the youngest person ever to audition, and be accepted to attend classes. Performing for small audiences around L.A. Ian earned his comedy chops. Acting wasn’t enough for Ian’s creative juices; he wanted to explore more avenues of the entertainment business. He got a small gig as a P.A. on a new puppet show. Ian discovered that he was pretty good with puppets and that begin his career as a puppeteer. This landed him a few gigs on Ninja Turtles, Power Rangers, and a great opportunity to work on a Jim Henson project.

After the millennium the work seemed to slow down and Ian quit acting and show business altogether. He turned in his S.A.G. card for a passport and left for Europe. During his six-month escape, Ian got a chance to study and learn the art of marionette puppetry in the Czech Republic.

As destiny would have it, Ian received a call from a gentleman inviting him to the 20th anniversary of “A Christmas Story”. Rekindling with cast members and friends from his past, prompted Ian to give Hollywood another shot. With a new spark of inspiration to get his name back in the spotlight, Ian could once again re-light a fire that he thought died out a long time ago. Settling back in Los Angeles CA., Ian co-founded a production company creating web content and producing various animated shorts.

Schedule a free chat with Dianne at VisionsApplied.com/Meet