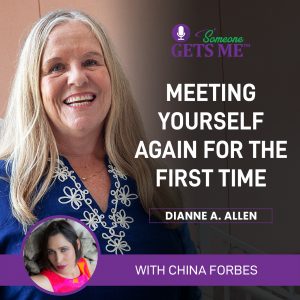 Episode 210: Meeting Yourself Again for the First Time with China Forbes

It’s another awe-inspiring episode from the Someone Gets Me podcast as I share the screen with China Forbes, the lead singer, and songwriter of the band Pink Martini. A gifted multipotentialite, China’s exceptional talents, coupled with her rich life experience, is truly a story worth telling (and made into a movie!)

Key points covered in this episode:

✔️ A musical genius making beauty from sadness. China Forbes’s unusual childhood, her mother and father divorcing when she was five, and the many struggles after that are depicted in a movie her sister made called Infinitely Polar Bear, starring Mark Ruffalo and Zoe Saldana. Such was the backdrop as China grew up and made it through with the help of art, music, and her eternal optimism for life.

✔️ She is releasing the song “Rise,” which she wrote for her Pink Martini bandmate, Derek Rieth. “I just felt like my words did not succeed in helping him, but I felt that they could help someone else who was struggling with suicidal thoughts. I’ve been sitting on it for six years, but it’s now coming out; I do believe that this song will help many people.”

✔️ There is still more to be done by the singing sensation, and she has this to say to fellow creatives: “You need not care what anyone thinks. It would be best if you dedicated time every day to do your craft. Trust that no one else is you and don’t compare yourself to others, and you need to get the focus off of yourself because self-consciousness is paralyzing. Ask yourself, how do I give my gifts to the world?”

✔️ China recently co-written Pink Martini’s two latest hits, including “The Lemonade Song,” approaching 2 million streams on Spotify alone. This soaring anthem of orchestral pop, written on either side of a breakup, celebrates the strength we all have to persevere and survive and learn to love our lives. It describes each individual’s Full Circle: the power each of us has to steer our lives in the direction we want to go, a direction that will end up back where we started, but as a different person each time we come around.

Soon after college China formed and sang with her first band. They regularly performed at NYC clubs CBGB’s Gallery, Mercury Lounge, and Brownies. Her first solo album Love Handle was released in 1995, and she was chosen to sing “Ordinary Girl,” the theme song to the TV show Clueless.

In 1995, she was plucked from New York City by Harvard classmate Thomas Lauderdale to sing with Pink Martini. She has written many of Pink Martini’s most beloved songs with Lauderdale, including “Sympathique,” “Lilly,” “Clementine,” “Let’s Never Stop Falling in Love,” “Over the Valley,” and “A Snowglobe Christmas,” which can be heard on Pink Martini’s holiday album Joy to the World. Her original song “Hey Eugene” is the title track of Pink Martini’s third album, and many of her songs can also be heard on television and in film. She sang “Qué Será Será” over the opening and closing credits of Jane Campion’s film In the Cut. Her original song “The Northern Line” appears at the end of sister Maya Forbes’ directorial debut Infinitely Polar Bear, released in 2015 by Sony Pictures Classics.

With Pink Martini, China Forbes has appeared on The Late Show with David Letterman, Late Night with Conan O’Brien, The Tonight Show with Jay Leno, and Later with Jools Holland. She has performed songs in over twenty languages. China has sung duets with Michael Feinstein, Jimmy Scott, Georges Moustaki, Henri Salvador, Saori Yuki, Faith Prince, Carol Channing, and Rufus Wainwright, among others. She has performed in venues from Carnegie Hall to Red Rocks, the Sydney Opera House to the Grand Rex in Paris. She released her second solo album ’78 on Heinz Records in 2008, a collection of autobiographical folk-rock songs.

Listen to China sing LIVE and visit  http://pinkmartini.com/ for the concert, live stream, and tour updates.

You have a vision inside to create something bigger than you. What you need is a community and a mentor. The 6-month Visionary Leader Program will move you forward. You will grow, transform and connect. https://msdianneallen.com/