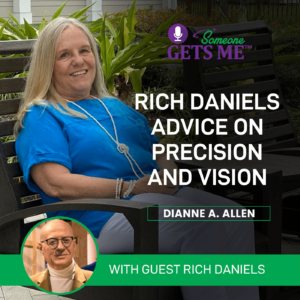 “The more we keep discovering, the more it keeps us alive and vibrant.”

You cannot see, taste, or touch music. But you can hear it, and you can most certainly feel it. Music can help relieve the stress, burden and bring you to a more peaceful place. It keeps us alive and vibrant. In this week’s episode, we are joined by Rich Daniels.

Part One of ‘Rich Daniels Advice on Precision and Vision’

Music was always a passion for Daniels as he realized at a very young age that it was possible to captivate an audience with a live performance while touching their hearts and minds in an indelible way.

Rich Daniels has been creating and conducting memorable musical concerts and events since 1974 when he began his professional journey as a high school freshman on the great south side of Chicago. He views the opportunity he has been given to have a career in music as a measure of service to others.

“When music resonates with our hearts, it can heal and touch us in many ways.” – Dianne A. Allen

Through the vehicle of The City Lights Orchestra, he has been given a chance to participate in thousands of programs nationwide for associations, corporations and non-profit organizations. Additionally, Rich and his colleagues have had the chance to take the stage and perform in concert with some of the greatest musical artists of the past half-century.

Wherever the need and whatever the medium, Daniels and his musicians have proven they are up to the task of making great music a part of every performance and assignment they have been given.

Part Two of ‘Rich Daniels Advice on Precision and Vision’

Artists as diverse as Ray Charles, Mel Torme, Garth Brooks, Rosemary Clooney, Dionne Warwick, Burt Bacharach, Michael Buble, and David Foster have all relied upon the ability of Rich Daniels and his orchestra to collaborate with them to create their special brand of magic in performance.

In recent years Daniels has also been busy in the studio composing and producing recordings for a wide range of projects. As the television and film industry has once again discovered Chicago as a great place to work, Daniels was recently tapped to be the musical supervisor for three different television series and allowed to compose music for the pilot of the Emmy-award winning show “Boss” starring Kelsey Grammer and filmed in Chicago.

“Music shouldn’t be viewed as something that requires someone to be better than somebody else.” – Rich Daniels

Rich and the orchestra were also featured in a concert on PBS this past Fall for the Horatio Alger Society of Distinguished Americans. These TV duties have also included being the on-camera music director for five seasons for the hit show on FOX, EMPIRE starring Terrence Howard and Taraji P. Henson, and Jussie Smollett. Rich has recently music directed for Jussie & Terrence on a PBS concert filmed at the Lyric Opera House in Chicago and most recently with Jussie and Renee Fleming at The Kennedy Center in Washington, D.C. with the National Symphony Orchestra.

Live music is meant to be a joyous experience that should entertain and inspire the listener while taking the audience on an emotional journey that allows them to be empowered by the spirit of this non-tangible entity.

Rich is most proud of the various charitable organizations his career has allowed him to serve and promote, especially The Mercy Home for Boys & Girls in Chicago (former board chairman), the DePaul University School of Music (current board chairman) and the Archdiocese Office of Human Dignity & Solidarity (chairman).

Rich was appointed by Illinois Governor Patrick Quinn to the board of the Illinois Arts Council in 2013. He is also the senior board member at the Chicago Federation of Musicians and a delegate to the Chicago Federation of Labor. Rich and his lovely wife Kathy have been married for 32 years and have 4 beautiful children: Rich (30), Mary Kate (29), Emily (26) and Maggie (24). Son Rich was recently married to Maggie Black in July of 2017! Rich Daniels knows that he’s a very lucky guy.  And that through hard work, perseverance and tenacity, together with a strong sense of faith, all things are possible.

During the 1980’s and 1990’s Rich toured extensively with former Tonight Show drummer Ed Shaughnessy. Additionally, Rich also was asked by the estate of Woody Herman to take the band out in 1991 for several tours around the country.  During this same period of time, Rich played for or conducted for Louis Bellson, Ray Charles, Mel Torme, Buddy DeFranco, Phil Wilson and many “pop” personalities including Garth Brooks, Dennis DeYoung, Michael Buble and David Foster.  Rich was also a featured soloist with Laurel Masse’ both in concert and on several of her recordings.

Former Chairman, Mercy Home for Boys & Girls (current member of the Board of Regents & Board of Directors).

Senior Board Member, Chicago Federation of Musicians (elected position since 1992).

Delegate to the Chicago Federation of Labor.

Delegate to the American Federation of Musicians.