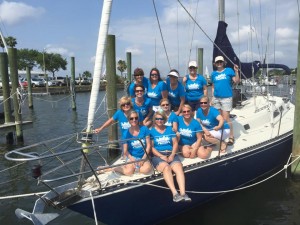 Yesterday I had the honor to sail the Tampa Bay Hospice Cup on Blue Moon. She is a C&C 40 and is a beautiful sailboat. The skipper was Nancy Baird and she owns the boat. We had an all women crew coming together to sail in a race while raising money for Hospice. We met at the boat in the morning and met one another. I remembered a couple of people from my previous 2 years participating in the event. Some of the women I did not know and a couple have never been sailing before. The overwhelmingly common ground was a strong commitment to Hospice and a desire to be part of the event. 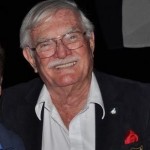 Charley Morgan was on hand to share wisdom and to give out trophies as the Morgan Invasion was happening at the same time! What an amazing day at Davis Island Yacht Club. I cannot remember not knowing Charley as he has been active in the sailing world for many years. He is an icon though his humility would not make that obvious. I even witnessed one woman begin to cry as he gave her team a trophy. She was so happy to shake his hand.

The race was fun. There was a lot of wind and many of the others on our crew were not seasoned sailors. Nancy and I and a few others were the anchors and everyone else pitched in and learned and helped. The day was amazing and fun. We laughed and we enjoyed sailing in paradise. The photography boat came by and we all waived, excited to have our picture taken. The boat was trimmed and she looked beautiful, cutting through the water elegantly. There were some small waves but this boat handled them well. No problem here.

Part of the race was to go around marks that are pre-set with letter designations in a unique way. We decided to make an acronym. Start line, C,A,H,F,E,A, Finish line – that’s it! Charley’s Angels Have Fun Everyday Always! We came up with the course. It was doable in the time and we were off. See, we are called the Charley Morgan Angels and our matching bright blue with white lettering shirts announced to all who we were.

The first 2 legs of the course went well, then while going around “A”, one of the sails, the jib, ripped and we had to get the problem handled.  It took some time to get the sail put away while minimizing the damage. Sails are expensive and we wanted to make sure it was taken care of properly. Everyone on the boat assisted perfectly. Now we only had half of the potential speed but we kept racing, not abandoning our custom course. The next leg felt long and sluggish but we made it! We finished the race and the women who never sailed before were happy and amazed. They shared how much fun they had and they were grateful to be part of our team this year. It was truly a day that was uplifting for me too!

Sitting at dock at DIYC after putting the boat away, we all shared our experiences. A couple of the women asked about learning to sail and even more, learning how to race sailboats! Everyone shared their comments and then we headed to the tent where we received our assignments as volunteers to help serve refreshments to the other sailors. 70 boats with an average of 6 people or more per boat meant a lot of refreshments to serve. This was special because it was The Hospice Cup. Our team continuing to make an impact on land made for a formidable presence. It was fun to be part of a team of people freely giving of time, talent and treasure for this cause.

We ended up winning an award for the best new drink recipe. It was refreshing! We celebrated a regatta well run, a race well sailed and a sense of community all coming together to support local Hospice Centers. This is what a sporting group can do to positively impact our world!

As I drove home, hoarse voice from talking over the band; I smiled and reflected on the day. My thoughts earlier in the week about Visions Applied having already given to the silent auction and that being enough seem so far in the distance. I even remember thinking that the Blue Moon team would miss me for about 10 minutes, so I could stay home and work. Both of these lines of thinking did not hold water so I dismissed the thinking that comes from being tired after a work week and I went to the boat. But this participation is personal, not work rather service as a leader. I had an amazing day with amazing people doing amazing work. After all, this is what my life is about, serving others! I am blessed, grateful and honored to be surrounded by others who freely serve as well.

Until Next years’ Hospice Cup, may you experience winds at your back and a following sea!