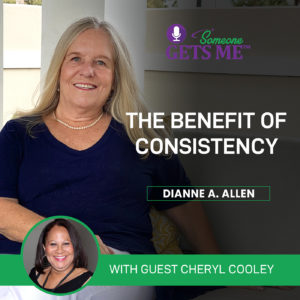 “Don’t feel ashamed of where you’ve been in life.”  — Cheryl Cooley

Part One of ‘The Benefit of Consistency with Cheryl Cooley’

KLYMAXX, the all-female band (AFB) with the 80’s R&B/Pop musical hits, “Meeting In The Ladies Room”, “The Men All Pause”, and “I Miss You” Billboard magazine’s #3 song of 1986, as well as into the ‘90s with the #4 R&B hit, “Good Love” now performing with a new revealing experience of professional high energy, commanding funky rhythms and sensual melodic movements that is a musical journey you will never forget!

“Be willing to follow your vision and stay persistent even if it feels like it isn’t happening.” – Dianne A. Allen

Cheryl’s parents always gave her a toy guitar every Christmas when she was a kid. At age eleven, she got involved in guitar lessons, which she felt comfortable about. She had a dream about being on stage playing an electric guitar, the lights were on, the entire audience was screaming, and she was getting ready to step to the microphone. But even if she already had it in her DNA to play the guitar, consistency played a huge factor in her success.

There is a lot of misunderstanding from the average person about what it takes behind the scenes with consistent focus, effort and work to produce a three to four minutes song. There’s so much planning involved before getting up on stage and doing that one-hour show. The technical things, travel preparation, rehearsing consistently, contract signing, hotel accommodation, venue, sound system, lighting, safety, security, and many more!

Most people only witness the climax part, but behind those are months of blood and sweat. The lesson here is, everything takes dedication, consistency, and perseverance no matter what your job is.

Part Two of ‘The Benefit of Consistency with Cheryl Cooley’

As a woman, Cheryl shares that some women have family issues to deal with as they continue to strive for success. They usually have to deal with children, husbands or parents. Many times, those people will not be supporting because they have a fear that something might happen. Sometimes, someone will give negative remarks, “Maybe you should go home and be a housewife. Maybe you should pick a safe job. Why do you want to be up on stage and you got all these strange people running after you?” As a woman, she believes that we have another layer of obstacles that we have to get over.

“Be a good steward of the resources that come. Don’t blow it, thinking that it’s an endless pipeline.” – Dianne A. Allen

There was a time when she told their band manager, “I don’t want to do this anymore.” But she finds herself waking up the next morning feeling motivated and ready to face the challenges again. Her fans also motivated her to keep moving forward, especially when someone says how much her song or interview inspired them. Music is her life. She describes it as something that’s like a source of oxygen for her. Whatever it is that lights up your world more than anything else, hopefully, this episode will help you keep that magic of consistency that will take your dreams to greater heights!

How to Connect More with Cheryl Cooley:

Join our Someone Gets Me Community!