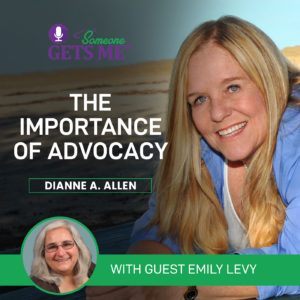 Advocacy ensures people in the society can protect their privileges and have their thoughts and desires considered. In this week’s episode of Someone Gets Me, Dianne A. Allen invites Emily Levy to talk about advocacy. Emily has all kinds of amazing things she’s doing around elections. So she will talk about that in the show.

Part One of “The Importance of Advocacy with Emily Levy.”

Emily grew up in the ’60s in San Francisco and was taken to protest against the Vietnam War by her parents and walking precincts for candidates her parents believed in. So from a very early age, she was involved in seeing how people work for what they want in their communities.

“I guess I have always risen to challenges in various ways. And I trace my activism and advocacy work back to toddlerhood when my biggest complaint was it’s not fair. I had this idea that things could be fair or that they were supposed to be fair. But it has not been okay with me when things aren’t fair for as long as I can remember. So my whole life, I have done what I can to make things fairer,” says Emily on asking how her life ended on becoming an advocate.

Furthermore, Emily also added that she had some struggles in academics when she was a child. She had to make her own challenges to live up to that sense of justice and having things be just on a spiritual level. She was like the petition kid and set everything up for justice.

“I remember we would have like 20 spelling words a week, and we were supposed to put them and set them into sentences. Some teachers insisted on one word per sentence, and some teachers let us use more than one word. So I would challenge myself to get all 20 words into one sentence because I was bored out of my mind. Things that didn’t make sense. To have us do work that we were supposed to do, even if we’d already learned what they were supposed to be teaching us. So in an elementary school, those are the kinds of challenges that I remember most,” Emily shared.

The school wasn’t stimulating enough for Emily. It wasn’t matching her skill set. Many geeky, nerdy, smart kids get over reinforced for their intelligence. Sometimes the adults miss the sensitive, emotional part, the need to be connected, and the need to be cared about.

It’s just so feeding into the head, and so that synchrony of the development gets exaggerated. It’s part of that whole idea that we get put into these boxes. This is the smart kid, this is the pretty kid, this is the athletic kid, and etc. There’s rarely a holistic appreciation of human beings as complex and valuable for everything about us.

The world is trying to push people into one box, and we’re not allowed to get out of it. When we push those boxes, as gifted, talented people, we’re going to where we push the limits and say, “No, hold on for a second. This is who I am.” Let’s pay attention to everybody else who is multidimensional because there’s so much more going on—that’s the game-changer.

Part Two of “The Importance of Advocacy with Emily Levy.”

The whole idea of justice is a form of perfectionism that comes to gifted people. It’s a natural part of our DNA to care about justice and things being right. It’s normal, and so you were aware of it and could feel it and see it and experience it from time to time.

Emily does advocate professionally and has been doing it for a while. Not everybody does it, and some people don’t put it in their vocation in the same interesting way.

Sharing about that piece of the journey, Emily says, “At some point in my 20s, I realized I had grown up with the sense that my mind was destined for greatness. But I had no idea what that meant, what did what was expected of me, who it was that was expecting it, and what I was supposed to do about it. But anything I fought about doing felt like it wasn’t good enough. At the same time, I got a chronic illness and became disabled. I was limited in my ability to interact with the world for about 30 years from that illness.”

Furthermore, she also shared her struggles in discovering her purpose. “In the time of my life, when I was expected to figure out what my career is going to be, I wasn’t able to have one. I was pretty much homebound, and I didn’t have many hours a day where I could do much other than take care of myself. It also gave me a lot of time to think about what I wanted to do.

“There’s no blanket answer for what everybody needs other than to be listened to and for someone to get them.” -Dianne A. Allen (15:00-15:07)

“My former partner and I adopted four kids, and the first three we adopted were already older. The first one was five, and then a year and a half later, we adopted siblings who are ten and eleven. A few years later, we adopted a baby. She’s a lot younger than her three siblings, and there is a way in which I thought of raising my kids as my work in the world, which will be familiar to the parents who are listening,” Emily related.

Specifically, she thought that raising those kids who all had a rough start and try to instill some values in them about justice is her social change work.

But when her youngest came along, Emily realized that her oldest kids didn’t see her as an advocate or an activist. She wasn’t doing anything else, except attending an occasional protest if she was able. “I wanted my youngest to see me as an active person working to change the world. And I mean, I wanted them all to see it.” Emily stressed out.

Getting more active in going forward, Emily came to understand a lot more about the problems with the United States’ election system and how our votes are counted—it is virtually counted by computers. Those computers can be programmed to produce any result, regardless of how people vote.

“I landed on positions being paid to get rid of those electronic voting systems and running investigations of elections and training people to observe the processes in an election office after an election and things like that.

I also knew that with the gravity of the United States’ situation and the world right now, this 2020 election was coming around, I need to focus.

In wrapping up the interview, I asked Emily if she was to have a billboard, what would she put in there. With words very well said, she replied,

“Life is better when things are fair for everyone.”

How To Get In Touch With Emily Levy: