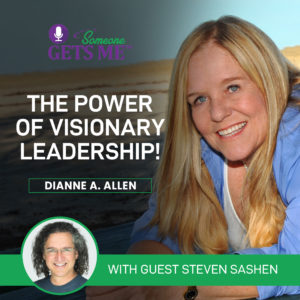 “We’re trying to change the world. That sounds grandiose and hyperbolic, but we know that what we’re doing is legit.”  — Steven Sashen, CEO of Xero Shoes

As a visionary leader, you cannot expect others to sacrifice like you are willing to do. It’s not their vision; it’s yours. Part of being a visionary is the intensity that runs through our veins. You make things happen. In this episode, we are joined by Steven Sashen to share the power of visionary leadership.

Part One of ‘The Power of Visionary Leadership with Steven Sashen’

Steven Sashen is the co-founder and CEO of Xero Shoes. His wife, Lena Phoenix, started the company after discovering the comfort, benefits, and FUN of natural movement, by getting out of thick, padded, motion-controlled shoes.

Steven likes to ask, “Do your feet feel better at the end of the day than they did at the beginning?” If not, you’re not wearing Xero Shoes.

Xero Shoes include a complete line of shoes, sandals, and boots that let feet function naturally — bending, flexing, and safely FEELING the world. People in 97 countries wear Xero Shoes for everything from a stroll on the beach to running a 256k 7-day race across Madagascar.

Steven and Lena appeared on Shark Tank, Season 4. See what happened at https://xeroshoes.com/sharktank/

Steven is also a Masters All-American sprinter, one of the fastest 55+ years old in the United States.

“Let go of old energy that is no longer serving you.” – Dianne A. Allen

We all have moments when we realize how much of a creative visionary person we are. Fortunately, Steven came from a family of entrepreneurs and small business people. For whatever reason, it never occurred to him not to do what he thought was interesting. His mindset is, “If I do those things well and they generate enough money, I don’t have to have some other job.” Which is why he never had an actual job or an interview. The way he thinks is — he always pictures the big future ahead of him.

Part Two of ‘The Power of Visionary Leadership with Steven Sashen’

Running a business isn’t rocket science! He doesn’t like it when people make money by lying to other people, which is what most of the footwear industry is. He wants to change the world by being right and proving that what he’s doing is legit. In fact, according to the majority of some billion-dollar footwear brands, Xero shoes are real, which is like admitting that what they’ve been doing for fifty years is a big lie. Like most successful entrepreneurs out there, he hopes to live long enough to see the fruition of his works.

“Being a visionary is in your DNA, and it’s how you are.” – Dianne A. Allen

As someone who’s been in the business for many years, here’s an interesting thought: If you don’t need to work for a living, what gets you out of bed? What makes you want to do something, especially when you know that some of the things that you’re going to think of are going to add more stress and difficulty in your life? Sometimes, it takes some practice of living differently than you think to discover whether what you thought is enough, if you need more, or if you need less. When Steven and his wife retired, they gave away twenty percent of their earned money because they didn’t need it. And it was amusing to find someone new every month who needed a couple of thousand bucks. He says, “Surprising that crap out of them was a blast!”

If you’re an aspiring entrepreneur, this episode will hopefully serve as a reminder that you can achieve anything because you have a big purpose.

How to Connect with Steven Sachen + Learn More About Xero Shoes