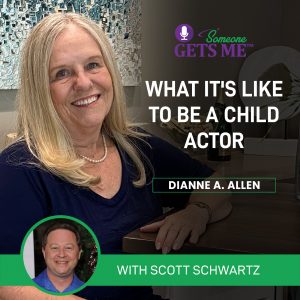 Episode 191: What It’s Like To Be A Child Actor with Scott Schwartz

It is important to listen to someone else’s story to make sense of your own. In this episode of Someone Gets Me, Dianne A. Allen hosts another valuable conversation as she sits down with former child actor Scott Schwartz best known for his roles in The Toy, A Christmas Story, and Kidco.

Scott recalls the great, the bad, the ugly of starting a career in Hollywood at eight years old. He spills important learnings from legendary actors, hitting rock bottom at age 21, persevering to go back to mainstream acting, and checking off a bucket list at the age of 50. Such is the roller coaster of Scott’s life, and he shares important lessons he learned along the way.

Key points covered in this episode:

Connect with Dianne A. Allen

Schedule a free 30-minute call with me at VisionsApplied.com/Meet