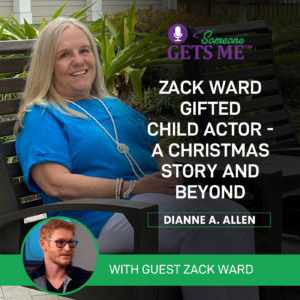 “The more you make yourself emotionally empathic and sympathetic, you can experience other people’s lives vicariously.”

If you’re struggling with courage to fight for your dreams, this inspiring episode will make you believe that you only regret the risks you didn’t take. Let’s welcome Zack Ward as he shares his adventure in the entertainment industry and the life-changing lessons it taught him.

Zack’s heartwarming story will inspire you to believe in yourself and appreciate your little wins in life. His move to Toronto was the starting point of his commercial auditions which took him a year before he got his first job.

He auditioned around thirty times, which led him into his big break – nailing an audition for a Christmas story. He started acting professionally when he was 10 years old, he’s now fifty-one, so that brings it to a total of forty years.

“Not everything you do is for money. Sometimes, it’s for the rarity of the opportunity that makes perfect sense.” – Zack Ward

As someone who’s working in the film industry, he shares that reading and being able to identify with characters you’ve never met are essential. The thing about acting is that you get to translate yourself into another universe and experience other people’s lives. His love for writing, directing, and producing has taught him that no one is stopping yourself except you.

Witnessing good movies gave him the opportunity to develop new eyes to appreciate great art. Magicians know how the trick works but it doesn’t make their performance less impressive.

Don’t overthink too much thinking that perfectionism is always required because the truth is – that’s an excuse from fear. You have the choice in life to risk failure. If you don’t risk failure, you end up failing because you never attempted anything.

“Take a lot of risks. You never regret the chances you take. You regret the things you didn’t try.” – Zack Ward

You are responsible for your own life. Imagine, several years from now, if you don’t do something, nothing will happen. On the other hand, when you’re gifted and overflowing with creative ideas, it’s so easy to get distracted.

Thus, Zack’s advice is: do not tell people what you’re going to do because the problem is your brain does not see the difference between your words and your actions. If you tell people, “Man, I’m going to write this movie about…” Then, you get tempted to talk about the whole movie when you haven’t written anything down yet.

You feel confident that you fulfilled your goals but the truth is you didn’t and you’re just getting started. Keep it to yourself. You can say to people, “I’m working on something, I don’t want to talk about it until it’s done.”

Zack Ward was born in 1969, in Toronto, Canada, to his mother, actress Pam Hyatt, and father, Todd Ward. At 8 years of age, he wanted to act, but his Mom wanted him to have a “normal life”, and would not let him. His older brother, Carson, argued on his behalf and Zack got the chance to perform.

After 2 years of commercials, he auditioned for the ’80s classic A Christmas Story (1983) and won the role of Scut Farkus. On the first day of shooting, the director, Bob Clark, saw that Zack was a foot taller than Yano Anaya (who played Grover Dill) and swapped their dialog. Now Scut was the bully and Grover the Toady.

Over the last 4 decades of his career, Zack has acted in 120 films, starred in three tv series, guest-starred in 70+ TV shows, and done dozens of commercials. He has written 7 produced features and 1 series. He has produced 4 films and directed/ edited 2 of them.

Ward is currently in post-production on the latest film he wrote and directed, “Patsy Lee & the Keeper of the 5 Kingdoms.” It’s an 80’s style family magic adventure movie in the style of “The Goonies” meets “The Dark Crystal”, starring James Hong from “Big Trouble in Little China”.